Spy voice recorders are the best device to secretly record conversations of people that you don’t want to know you are doing so. You can keep one in your pocket and when the right time comes, simply push that button and smile to yourself, while the person you're secretly recording spills the beans.
A spy audio recorder can be concealed on your person or in a room location and are used by undercover law enforcement, private investigators and lawyers for recording crucial evidence. These secret recording devices come in different forms - usually small - and are easy to use and conceal. But how do you know which is the best spy audio recorder to buy? Well, we've done the work for you. Check out the list of our best spy voice recorder choices below:
What's In Our Spy Voice Recorder Guide

2. Quick Guide: How To Choose A Covert Voice Recorder

4. The Complete Buyer's Guide: How To Choose The Best Spy Audio Recorder

Our Top 3 Best Spy Voice Recorder Models
Quick Guide: How To Choose A Covert Voice Recorder
When choosing to buy a spy voice recorder you will want to know what to look for in the best available. Based on experience, we have created this buying guide of important specifications that are needed in the best covert voice recorders. Knowing these functions (and why they are important) can assist you in making a good buying decision. Here they are:

If you want more in-depth details on these covert voice recorder specifications then continue reading as we cover them all further on. Or you can see them now.
Complete Review Of The Best Spy Voice Recorders
by a former security specialist and private investigator
Our spy voice recorder reviews have been conducted by a former security specialist and private investigator that has many years experience in using spy gadgets and what is needed to meet a good quality voice recorder for spying with. The following best buy spy voice recorders were chosen among many based on a number of factors, qualities and functions. Our best spy voice recorder list is not in any particular order but recording devices we would invest in.
RaWerks Professional Spy Voice Recorder 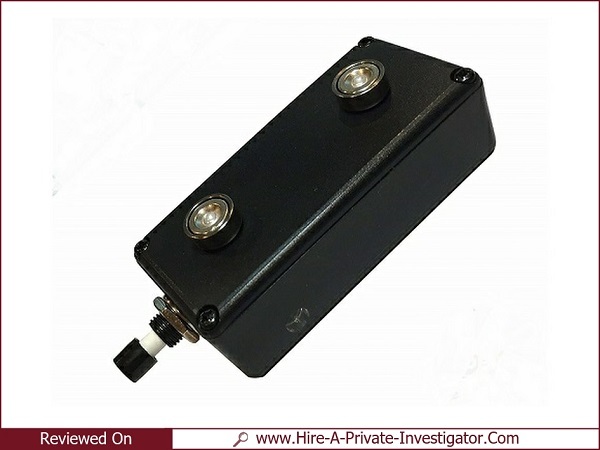 Covert: This law grade spy voice recorder isn't exactly the most covertly designed recorder that can be used in the open, as opposed to a pen or other everyday item. Its design was built with magnets so it can be strategically placed - hidden away from the eye - on or under a metal surface. It can also be hidden in a pot, jar or cupboard or simply placed in your pocket to be used as a body-worn device.
Voice activated: yes, this professional spy voice recorder has a voice activation mode which can be adjusted for sensitivity - perfect for unnecessary recording.
Playback quality: the RaWerks law grade recorder produces a high quality audio playback with great end results to listen to so you can be sure of what was said. The voice recordings need to be transferred to computer for listening to and has date and time for easier file identification.
Recording range: a great feature this audio spy has is the high quality voice recording from up to 28 feet away. This means you can capture conversations at longer distances, particularly in large rooms.
Easy function: the one button control makes it easy to activate when using in close proximity to your target. Just discreetly tap the on/off button on top to start/stop audio recording. There's no sound or lights to give you away.
Recording time: this spy voice recorder has 8GB of internal storage and is able to record up to 288 hours of high quality audio. The battery in standby mode will last 75 days and will record 72 hours of audio before needing to be recharged.
Audio file transfer: transferring the recorded audio files of this covert recorder is easy with its USB file transfer feature. There is no special software needed for audio download and storage and works with both PC and Mac computers.
EyeSpy USB Spy Voice Recorder 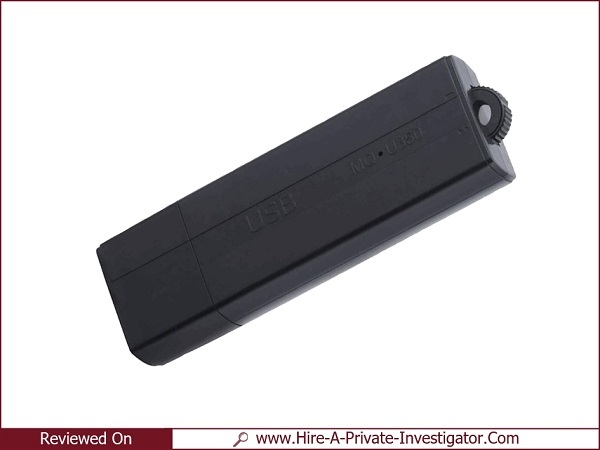 Covert: it looks outdated and kind of boring, which is perfect for secretly recording conversations. It attracts very little attention and would actually be a great covert voice recorder, even in the open. Being small, you can place it anywhere and is a great spy voice recorder for the home or office.
Voice activated: yes, as well as having a continuous record function this is a professional voice activated digital spy recorder. Place the recording device where you want and forget about it. It'll turn itself on the next time it hears sound.
Playback quality: the flash drive spy has high quality audio recording, giving a crisp clear playback. The files are recorded in High Definition and can be played back in any audio program including Windows Media Player and iTunes.
Recording range: it has a moderate recording range and can pick up voices from as far as about 20 feet away. So is ideal for a room or car bug.
Easy function: this spy voice recorder has no confusing buttons or lights just an easy one-touch button. It has a rotating button / switch - push the button / switch to start and stop recording, and rotate it up or down to easily switch between voice activation and continuous recording modes.
Recording time: it has an in-built battery and 4GB storage capacity that can hold up to 144 hours of audio recordings, and can record for 15 hours in continuous mode on a single battery charge. It can also record while plugged into a computer or wall using a USB wall charger, so you don't have to worry about battery power. Just plug it in and record until the memory is full.
Audio file transfer: you can connect the flash drive audio spy to any PC or MAC computer via a USB port to easily listen to the recorded files.
SpyCentre Spy Voice Recorder Keychain Covert: we love this spy recorder's covert ability. It looks like a regular car remote control keychain that's "nothing special". This is precisely what you want in a stealthy audio recording device; something you can place in your pocket or on a table which goes totally unnoticed. You can simply activate the device (completely undetected) and it just looks like you're fidgeting with your keys.
Voice activated: yes; you can change the mode from continuous to noise activation recording.
Playback quality: the playback quality is good, so you can be assured of getting clarity audio.
Recording range: the keychain voice recorder has an audio pick-up range of 40ft in optimal conditions which is fine for recording at close range or in large rooms.
Easy function: this micro spy voice recorder couldn't be any simpler to operate. It has a simple on/off switch for quick action recording.
Recoding time: the 2GB flash memory holds up to 30 hours of audio; which is plenty of room for all of your secret audio recordings. On a single battery charge it has the ability to record continuously for 10 hours or 50 hours in voice activation mode (although it can only hold up to 30hrs of audio).
Audio file transfer: this audio recorder is compatible with MAC or Windows and no other software is needed to transfer files using its USB Device. Just plug it directly into a USB port and transfer your audio files. The USB is also used for charging the device's in-built battery.
Buying Guide: How To Choose The Best Spy Audio Recorder

Ok, so we mentioned earlier in our quick buying guide the specifications, functions and qualities a good covert voice recorder should have. These specifications are the basics of what is needed to ensure you or your secret audio recording device don't get discovered. Let's go over them in more detail:

Unless it is one to keep in your pocket, your recorder should be completely inconspicuous and blend in to its surroundings. Some secret audio recording devices come built-in within general items such as pens, key chains, computer USB sticks, watches, car key remote controls, etc. which is great, but what you don't want are flashing "record" lights or noisy bleeping sounds when pushing the function buttons, as these will give your game away. The obvious question here is, does it attract attention and does it stand out as a secret recording device and if the answer is yes then it is not practical for covert use.
Ideally, the audio recorder you buy should have the ability to be voice activated as well as have continuous record.
Understandably an audio recorder should have clear audible playback with no crackling or distorted sounds. Choosing a covert voice recorder that has high fidelity (reproduction of sound quality) should be a quality to look out for. Some recording devices also have a background noise cancellation function which helps to reduce background noise of the recordings, making them more distinct with better quality.

Choose a hidden audio recorder that can easily record sound or conversations close-up and at a relatively long range (at least wall-to-wall in a standard room). You will have to decide what audio pick-up range you will need but the greater the better. Some voice recorders have an automatic level control sensitivity function that will adjust according to noise levels and as a result will increase its sensitivity to pick-up noise at greater distances.
Not so much for the voice activation function of the spy recorder but you will want an easy one-touch voice recorder you can simply operate without looking. This is beneficial when your audio recorder is secreted inside a purse, bag or pocket. As soon as you need to start recording conversation you will want the certainty you have pressed "record" and that you are recording your evidence - for this you will need a simple one-touch button.
Depending on use, you will want a decent amount of storage space. Audio doesn't take up as much space as video but your spy voice recorder needs the capability of storing long recordings. The length of time an audio spy recorder can last for is not only dependant on storage space but also on power. Most audio recorders used for spying are powered by battery only and considerations should be made for how long the battery will last. Voice activated spy recorders are the best as they conserve power and storage space when in "sleep" mode.
Never purchase a covert audio recorder that you cannot transfer or upload the audio files to another medium such as laptop. Some cheaper models don't have this function which means you can't use you recorder again if you have important recordings you don't want to erase. It is also useful to have a date and time function that allows you to easily locate important recordings.
Reasons For Using A Spy Voice Recorder
The best reason for using a covert voice recorder is that it gives you control and leverage - but don't use one for illegal or unethical purposes. It should be used to help you or another in legitimate situations - particularly in gathering and building evidence. There are many situations where a hidden voice recorder would be useful. A hidden recorder can be used for the following situations:

Whatever the reason, you will want to make sure you buy the best audio recorder you can and you will want to make sure you get the right specifications in your device.
Legalities Of Recording Conversations
As with most spy equipment there are laws covering surveillance and the use of such spy gear. Before you buy any type of audio spy gadget find out about the laws in your country or State. Recording conversations in the U.S. can be a bit of a minefield where legalities are concerned as with other countries. You can find more information here on laws relating to hidden cameras and secretly recording conversations.